Hi everyone! I’m still here (I swear) and what a better way to come back from a reviewing hiatus with this amazing book! Thank you so much Literary Bound Tour for including me in the blog tour and to Penguin Random House for the stunning finished copy 💕

Title: Skin of the Sea

Synopsis: An unforgettable fantasy debut inspired by West African mythology, this is Children of Blood and Bone meets The Little Mermaid, in which a mermaid takes on the gods themselves.

Simi prayed to the gods, once. Now she serves them as Mami Wata–a mermaid–collecting the souls of those who die at sea and blessing their journeys back home.

But when a living boy is thrown overboard, Simi does the unthinkable–she saves his life, going against an ancient decree. And punishment awaits those who dare to defy it.

To protect the other Mami Wata, Simi must journey to the Supreme Creator to make amends. But something is amiss. There’s the boy she rescued, who knows more than he should. And something is shadowing Simi, something that would rather see her fail. . . .

Danger lurks at every turn, and as Simi draws closer, she must brave vengeful gods, treacherous lands, and legendary creatures. Because if she doesn’t, then she risks not only the fate of all Mami Wata, but also the world as she knows it.

This perfectly crafted mermaid retelling based on West African mythology had me hooked from the very first page. Readers follow Simidele, Simi to those in the book, a Mami Wata (a mermaid who has been blessed and is tasked with retrieving the souls from those who die at sea). But Simi has a past that readers are able to see flashbacks of, which add a hint of mystery as to how the Mami Wata’s are chosen and the stories that revolve around them.

The world-building is absolutely stunning, from being cast into the depths of the dark sea or travelling the land of the walking. Everything about this book was immersive, not to mention the allusive gods and the absolutely terrifying creatures that they encounter…but I’m getting ahead of myself here.

The characters are wonderfully fleshed out, even from the most minor, they were described perfectly that I felt as though I stood in the village with them. Of course, Simi stole the show with her courage and feistiness, but also her internal struggle of choosing the do the right thing versus what she is expected to do.

My only *minor* negative is that I wish there was a glossary, so I knew how to properly pronounce some of the names of the people as well as the creatures that they had encountered. While I did have to Google a few of them, I don’t think it took away from the book but added to the mythology.

Oh, and let’s not forget the ending! Let’s just say that when I finished the last chapter, I truly thought there was going to be more because a whole lot happened and BAM cliffhanger 😭 I’m so excited to see where the second book will take this adventure!

Side Note: in case you missed it, this cover the just drop-dead stunning 🤩 It is even prettier in person and is currently sitting pretty on my shelves 😉

About the Author: Natasha Bowen

Natasha Bowen is a writer, a teacher, and a mother of three children. She is of Nigerian and Welsh descent and lives in Cambridge, England, where she grew up. Natasha studied English and creative writing at Bath Spa University before moving to East London, where she taught for nearly ten years. Her debut book was inspired by her passion for mermaids and African history. She is obsessed with Japanese and German stationery and spends stupid amounts on notebooks, which she then features on her secret Instagram. When she’s not writing, she’s reading, watched over carefully by Milk and Honey, her cat and dog.

Don’t forget to check out the rest of the posts for the tour here!

Published by Beauty & Her Books

Hello! I'm Carly, a 20 something book blogger from Canada. When I'm not drowning in University work, I can normally be found with my nose in a book (or bindging something on Netflix) View all posts by Beauty & Her Books 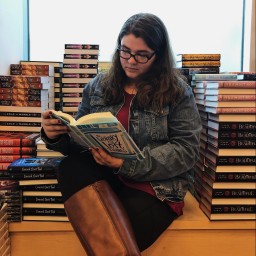 Bookworm. Hufflepuff. Avenger. Often found with a book in one hand and a hot chocolate in the other.